UBUNTU – I am because We are

Armando Milani, asked ANONIMA to design a poster for the international collective exhibition UBUNTU – I am because We are.

We seized the occasion to spand some time with together and hold an interview. 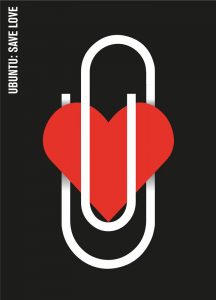 A paper-clip to protect and maintain together. A heart. Universal symbol of love.
This is the chosen image for the exhibition I AM BECAUSE WE ARE which will open on Monday October 15th at 6 pm at the arcades of the Rotonda di via Besana in Milan. (Map)
Armando Milani designed this exhibition poster and conceived and curated the exhibition in collaboration with Francesco Dondina, with contributions from the Società Umanitaria, and the patronage of the South African Consulate General of Milan, the AGI Alliance Graphique Internationale and of the AIAP – Italian Association of  Visual Communication Design. 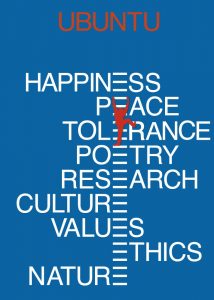 An appointment where the world of graphic and international design was asked by master Milani to offer its own understanding of the ubuntu’s concept, term which, in the Subsaharian Africa’s territory, expresses a universal bond of sharing that connects all humanity. This concept comes from a bantu’s word, and it is often related to the expression Ubuntu ngumuntu ngabantu: I am what I am because of what we all are. I am because We are.

From Sub-Saharan Africa to Armando through Nelson Mandela 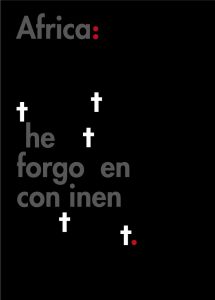 Discovered by Armando Milani from voice and thoughts of Nelson Mandela, absolute witness of an ethic founded on loyalty and respect for the mankind, Ubuntu becomes, in the hands of this artist, something to keep in the pocket.
For one year Ubuntu is with Milani, explained and performed in various parts of the world: the AUM and Anàhuac Universities in Mexico, the American University and the Kemet Art and Design Institute in Cairo, the American Alfred University, the IED – European Institute of Design and the ABA – Academy of Catania, Cape Town University, to quote some.
Italian ambassador of the International Day Design 2018, dedicated to the relationship between design and economic sustainability, both social and environmental, he knows how to connect in a sensitive way the value of the universal concept of ubuntu with his stylistic figure, defined with clarity and strength, for an efficient communication.

The challenge: to find a graphic synthesis of ubuntu’s concept.

Milani says that the role of the visual designer is “to interpret words and ideas with synthetic, unmistakable images, codifying reality, but interpreting it at the same time with his own values. Each project is appropriate, unique, but also ambiguous, mysterious, undefined, to arouse in readers that curiosity and that possibility of interpretation that emotionally involves them and stimulates their memory”.
The messages of these images are powerful because they are simple. 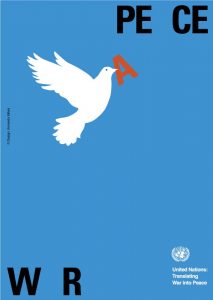 Designer Bruno Munari said: “complicating is simple, simplifying is difficult”, yet it seems natural to Armando Milani to create simple works that remain in the collective memory.Just think his poster of the dove with the letter A in its mouth. That poster was made to commemorate the 60th anniversary of the United Nations in New York in 2005. It is a powerful graphic gesture, a dove capable of cutting the pervasive sense of threat from the word WAR to give hope and future to peace.
Armando Milani, an internationally respected designer,, bond to the ubuntu philosophy for his explicit necessity to communicate what he considers to be fundamental and what fonds a society: the importance and the beauty of mankind. 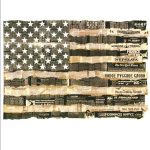 His concerns about this led to the development of the exhibition UBUNTU – I AM BECAUSE WE ARE with a significant participation of huge international design names (besides Armando Milani himself, artworks from Albe Steiner, Massimo Vignelli, Milton Glaser, Uwe Loesch, Isidro Ferrer, Alain Le Quernec  and many others great names of AGI will be displayed), next to the proposals of students from  the main educational institutes of this field, drawings of the children from Bangladesh, Northern America and the Luzzati Foundation of Genova will be displayed, as a reminder of the fact that the Rotonda Besana is also the headquarter of the MUBA, the children museum.

Designers from all over the world for a project that communicates broadly and takes action on reality. 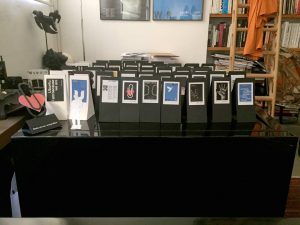 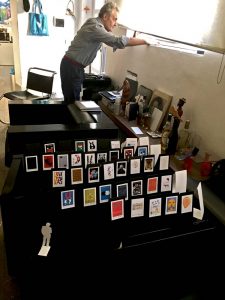 “From everyone to everyone”:  from 5 to 80 years old, all around the world ubuntu will be displayed, performers will be ambassadors of a new form of collectivity, that only subtends the principle of mankin’s universal uniqueness, and it allows to ponder on how a communication project is able to change reality.
The exhibition will be open until the 28th of October, than the project is to move to Madrid, at the Centro de Creación Contemporanea Matadero.
A next stop will be in Sudafrica, in Cape Town with other locations to follow.

Anonima’s poster will be published after the opening, together with many other examples from the exhibition.

Below are the directions to the exhibition in Milan: we are waiting for you!

This site uses Akismet to reduce spam. Learn how your comment data is processed.